Yes, as of December 1 2017 the state Department of Transportation has allowed Uber and other ride hailing services to pick passengers up from Honolulu’s Daniel K. Inouye International Airport. While the DoT has promised to monitor concerns carefully, that doesn’t help with your current query. You want to know whether or not you can (yes) or should (wait for it) take Uber from HNL to your Waikiki hotel or other Oahu destination.

Now we know, coming from a Honolulu airport shuttle service, you probably think that you’re going to get a biased response. But please bear with us. We’re not even going to address the fact that local island news source KITV feels the need to provide tips for riders to protect themselves from the increasing number of sexual predators posing as Uber drivers (isn’t that enough?). Instead, we’re going to focus on the every day experience, as reported from a part-time local (Marcus) who makes his way to and from HNL dozens of times per year. Marcus took the “Uber test” twice (once with family) over spring break and below is his accounting of those unfortunate, but not uncommon, experiences.

If you’ve just flown over from the mainland, then you’ve spent at least 6 hours in the air, and another 30 minutes or so gathering up your luggage and waiting in the bathroom queue (guilty). The last thing you want to do, is figure out where the heck you’re supposed to find your transportation. I know the airport pretty well, but getting to the designated Uber pick-up spot was a pain.

Uber is restricted as to where they can pick-up HNL passengers. The official (and highly regulated) pick-up spots are stashed away on Lobby 2 and on the upper departure deck at Lobby 8, not at baggage claim, where you are. When it comes to the airport, it could not be found in a more inconvenient place, unless you’re flying inter-island. Keep reading.

On my other test, I used my recent island hop to/from Maui as an opportunity. Flying Mokulele Airlines, I returned from Maui (via a Molokai layover for good measure) and arrived at the interisland terminal (Terminal 2). Stepping out, I swiped off “airplane mode” and opened the Uber app, hoping to get picked up in the front of the standalone terminal. Instead, I received a not-so-clear prompt to take a ten-minute walk outside (in the rain, mind you) to the main terminal to the designated Uber pick-up zone. Yes, it’s called the “Interisland” pick-up zone, but it wasn’t located at Terminal 2. What was frustrating, is that I had to watch fellow commuters get scooped up by their pre-booked shuttles while I had to shuffle off in the humidity to hunt down the Uber. I won’t be doing that again.

3. Uncomfortable and Non-Accommodating Option for Families

In the first test from the main HNL terminal, I was accompanied by family. After dragging them to the Uber pick-up spot, our ride showed up and right away I could see this was a bad idea. While UberX is supposed to accommodate up to a party of four, there should be a disclaimer when the pick-up is from the airport. The driver’s Toyota Corolla didn’t begin to have enough room for the four of us, a booster seat, and carry on luggage. My knees were pressed to the front dash for the entire 32 minute ride to Waikiki. A family of four, or three with standard luggage, on a trip to the island should not consider Uber as an option. Sure, you could go with UberXL to ensure you’ve got room for the whole crew, but at that point the price jumps up by about 25%, so why would you even consider it given the other inconveniences noted above, and below?

This is a standard Uber complaint, but one that is accentuated when coming from the airport.

After a six hour (or more) flight, I don’t always want to engage in supposedly witty banter for 30 to 45 minutes. Now don’t get me wrong, I’m totally OK with the typical shuttle driver conversation, such as “Where are you from?“, “Don’t worry, the weather will clear up“, “Is this your first time to the islands?” and so forth. That’s all part of travel. But when you roll with an Uber, you’re dealing with a non-professional driver, someone who often has more personal baggage them the entire flight’s conveyor belt you just left behind at HNL. Mr. Toyota Corolla wanted to talk about everything from the novel he was writing to our Lord and Savior, all the while bumping Adele from his subwoofer.

No thanks Uber. I’ll take small talk about the weather any day.

The biggest reason people take Uber, is the cost benefit. But this is a bit of a myth. As I pen this article (2:30 PM) I’m checking the app and seeing that if I want to get from HNL to Duke’s (at Outrigger Waikiki Beach Resort) for a Mai Tai, UberX is going to cost me $12.33 more than this $35 flat rate shuttle. That’s an opportunity cost of one full Mai Tai, or two during happy hour. And if I need room for the family in an UberXL, we’re looking at nearly $65 bucks! 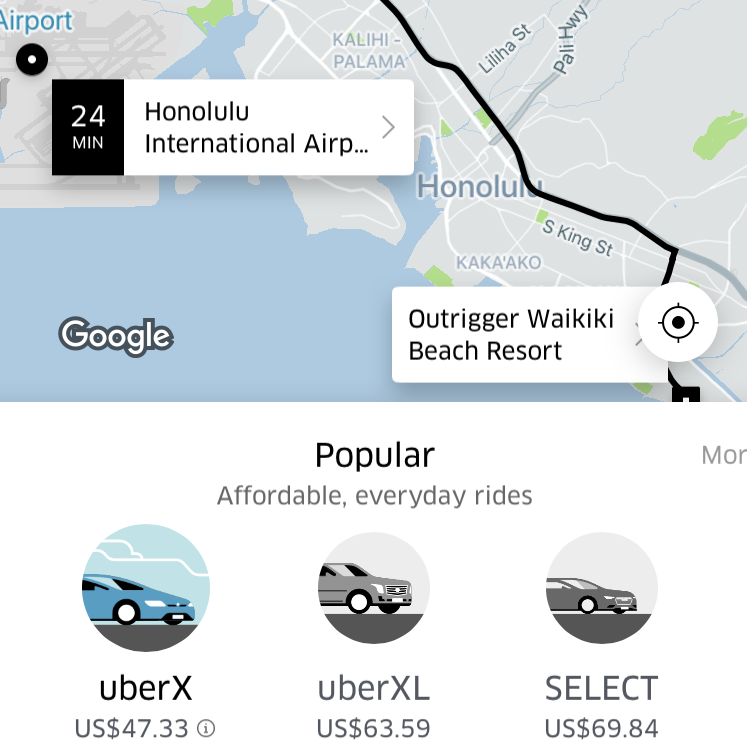 Look, Uber (and Lyft) absolutely have their place on the island. There’s a reason I have the app after all. If I need to get from Makakilo to Makaka at 9 PM you’d better believe I’m looking to hail a ride in someone’s 2015 Dodge Dart while hearing about their screenplay. But when it comes to getting from Honolulu International Airport to Waikiki or anywhere else on the island, a flat rate, direct shuttle reservation makes way more sense. Book yours today.